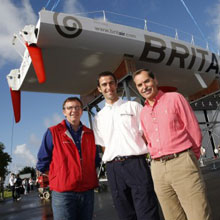 After nine months of work at ten o'clock local time on Wednesday 18th July 2007, the launch took place of the 60-foot (18.28m) Imoca monohull Brit Air designed by Finot-Conq and built by Multiplast for the Breton skipper Armel Le Cléac'h.
This was a particularly moving time for the yachtsman from Morlaix Bay, as well as for all those, who had worked on her at the yard and the many members of the staff of Brit Air that came along to support their protégé. Armel le Cléach: "...The launch of Brit Air is a major step in my short life – I'm only thirty. I know how lucky I am to be able to do what I like doing most, single-handed sailing and racing. And particularly being able to see the boat I dreamt of two years ago for the

Vendée Globe coming to life, with the designers, boatyard and the whole of my support team..."
Hardly was she in the water, and Brit Air was leaving the banks of the Morbihan Gulf and Vannes behind to make her way to Port-la-Foret/Concarneau, her shore base. On Thursday 19th July she underwent the 180° righting test and her mast stepped immediately afterwards. Then there are the various strain tests to be carried out by the Multiplast yard and finally the 90° stability test with the mast up, before she sails on 25th July. Gilles Ollier, the head of Multiplast: "During the month following the launch, we remain responsible for all our prototypes, in order to carry out a complete check-up on the structure and all the mechanical parts. One of the yard's staff will be present for all her sea trials. It is only after this is over that we officially hand the boat over. This extremely stringent quality control policy follows on from all the routine checks carried out during the build. This is a crucial stage, which allows the skipper and the yard, as well as the designers to go through the options and make sure everything is working correctly..." 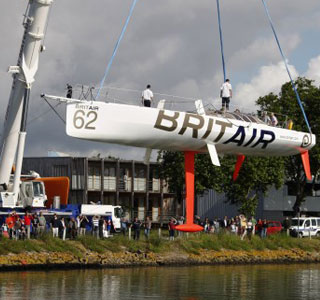 While Brit Air is a boat from the very latest generation, her skipper wanted her above all to be efficient and easy to handle. Armel le Cléac´h: "... I come from the Figaro circuit, where you very quickly reach the full potential of the boat. For Brit Air, I used the same ideas, knowing however that in the Vendée Globe, you don't very often use more than 80% of the boat's ability. We have a year and a half before the start in November 2007 to get to know her. Considering what I have seen of the competition and of Yann Elies's Generali, which came out of the same mould, I remain fairly confident. I can't wait to sail her and head off to Cowes (Isle of Wight) in early August for our first race, the famous Rolex Fastnet Race, which I will be racing with my brother Gaël..."
Indeed, with her tillers, a very clear deck layout and her wing mast, Brit Air exudes simplicity. Jean-Marie Finot, the designer of Brit Air: "... If simplicity was our watchword, that does not mean to say that there is nothing complicated or sophisticated about her build. It allows us to have very powerful boats with a lot of canvas, and which are consequently fast. The skippers of Armel Le Cléac´h's generation show us each day that they are increasingly able to deal with this power..."

A flagship for the company

By becoming involved with Armel Le Cléac´h in his 60' Open project with the Vendée Globe as the ultimate goal, the Breton airline company knows it has made the right choice. Marc Lamidey, Ceo of Brit Air: "... It is quite normal for a company like Brit Air to invest in sailing. Firstly, because we are based in Morlaix, at the waterside and because we are the only Breton airline. Then there are many similarities between the marine world and aviation: we share among other things the same vocabulary, and also the same values in terms of performance and rigour in a universe of high technology. Finally, ocean racing means travel and dreams, as well as being our playground everyday. Investment in the Imoca class are within our financial capabilities. Our clients and those, who work with us can easily understand the reasons for this collaboration..."

Free of rights photos for press 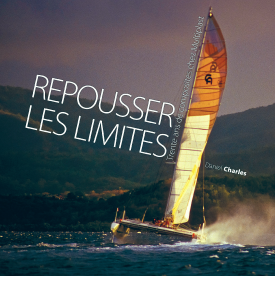